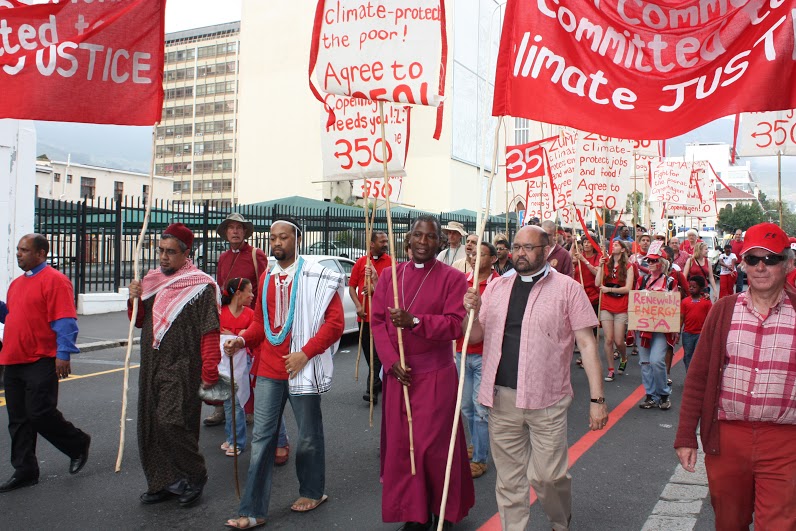 To strive to safeguard the integrity of creation, and sustain and renew the life of the earth.

There are 85 million Anglicans worldwide in over 165 countries.  We share a common home and a common commitment to care for our God given earth. Many of our sisters and brothers are already dramatically affected by climate change. Our futures are interconnected and we need each other.

Letters for Creation is a global conversation and renewal of commitment to love our neighbour through our actions on climate change and biodiversity loss.

The Archbishop of Canterbury invited senior clergy from across the Communion to share their thoughts on two questions:

What does the Care for God’s Creation mean in your Province?

What do you want to say to the Anglican Communion about the Care for our Common Home?

Below are some extracts from the letters received:

‘I speak from the Diocese of Polynesia -a part of the Province of Aotearoa, New Zealand and Polynesia. Within the boundaries of this Diocese, which includes large tracts of the Pacific Ocean, are clear testimonies to the reality of Climate Change which affects our global village. Island nations are being impacted by sea level rising due to Climate Change. Tuvalu, Kiribati and the Marshall Islands are threatened with non-existence as the sea level rises and land becomes uninhabitable. In Fiji, many villages are having to be relocated. In the Tongan island Pangaimotu, where as a boy I used to fish with my father, coconut palms stand stripped of fronds as the salt water encroaches and eats at root systems below the earth and cyclones ravage above…….

We speak of the faith and resilience of our people. However, we cannot promise that there will not be another Cyclone of equal or greater intensity affecting vulnerable communities and destroying homes and crops and sometimes lives. People in vulnerable communities need a voice.‘ Most Reverend Winston Halapua, Bishop of Polynesia and Primate and Archbishop of Aotearoa, New Zealand and Polynesia

‘In Southern Africa we are dependent on water for life – and climate change is changing rain patterns. On the eastern coast of southern Africa, Mozambique has been devastated by flooding. In contrast, in Namibia, Swaziland and South Africa the greatest impact has been that of crippling drought. Schools in parts of Swaziland had to be closed when they ran out of water for school toilets. In northern Namibia and southern Angola, people have been forced to slaughter their cattle, destroying their future economic stability. And in Cape Town we are a few months away from reaching “Day Zero” when a city of three million people might run out of water before next year’s winter rains come.’

‘The world needs you now. The actions that we take in the next five years are crucial to stop us from reaching the tipping point where climate change becomes unstoppable. Look into the eyes of your children and grandchildren and do what you need to do to preserve the world for their future.’ Most Reverend Dr Thabo Makgoba, Archbishop of Cape Town

‘As people of faith, we must not just state our beliefs – we must live them out. One of our central beliefs is that we find purpose and joy in loving our neighbours. Another is that we are charges by our Creator with taking good care of his creation. The ethical crisis of climate change is an opportunity to find purpose and joy, and to respond to our Creator’s charge. Reducing the causes of climate change is essential to the life of faith. It is a way to love our neighbour and to steward the gift of creation.‘ Most Reverend and Right Honourable Justin Welby, Archbishop of Canterbury

‘The City faces enormous challenges to do with housing, clean water, environmental protection, ecological and bio-diversity, and climatic pollution. In these respects Hong Kong is particularly vexed by its situation: not only as part of the most populous nation on earth – China – in the most economically diverse continent – Asia – but also as a port on the shores of the busiest shipping lanes in the world. These are realities that must be faced and addressed as constructively as possible, something that the Anglican Church of Hong Kong seeks to do by always engaging with civil and political society. In a city like Hong Kong there is no future in being outside of these discussions: truly caring for our city and our part of creation means being part of the way forward and part of its future. Our mission is to God’s Kingdom in the midst of this world: being God’s companions means walking these same streets and living in these endlessly crowded communities, with and for one another.’  Most Reverend Paul Kwong,  Archbishop of Hong Kong

‘We today are presented with a simple choice: will we live as friends, as brothers and sisters, as Beloved Community, or will we be subsumed under the rising waters of chaos?….

This Anglican Communion is the third-largest Christian body on the planet. Surely we can do it. I’ve seen us work together and with our friends of other faiths and no faith at all. I’ve seen us intervene and provide education, recovery and healing following climate-based tragedies across this globe. We can maintain a vigorous and effective commitment, and empower Anglicans everywhere to undertake bold action to mitigate and reverse climate change…….

‘We can do this. I know because I saw people of every nation, faith, age and race move to stand with the Standing Rock Sioux as they struggled to turn back a pipeline that threatened their sacred lands and their water supply. And I saw the Episcopal Church flag at the front of that procession. When crowds chanted “Mni Wiconi” (water is life), Episcopalians chanted with full voice because we have been given new life in Jesus Christ through the waters of baptism. Yes, water is life. Yes, we should honor it.’ Most Reverend Michael B. Curry, Presiding Bishop and Primate of the Episcopal Church

‘A true ecological approach always becomes a social approach; it must integrate questions of justice in debates on the environment, so as to hear both the cry of the earth and the cry of the poor. Everything is connected. Concern for the environment thus needs to be joined to a sincere love for our fellow human beings and an unwavering commitment to resolving the problems of society…….Thanks to our bodies, God has joined us so closely to the world around us that we can feel the desertification of the soil almost as a physical ailment, and the extinction of a species as a painful disfigurement. Let us not leave in our wake a swath of destruction and death which will affect our own lives and those of future generations.’ Most Revd Zacharie Masimango Katanda, Archbishop of the Congo and Bishop of Kindu

‘Australia is the fourth largest coal producer in the world, and that coal is Australia’s second largest export commodity. The mining industry has formed a significant part (though in an ecological era not an uncontested one) of white Australian cultural identity, and despite the global turn to renewable sources, a considerable temptation and quandary is posed for politicians and the business sector by the global demand for Australian coal……

The unique ecological tapestry of Australia relates not only to the sustainable way of living of its First People and to the contentious question of coal. It is also a country whose features make it particularly vulnerable to climate change……

Because of Australia’s unique position and geography (as the driest inhabited continent in the world) it is likely to be more severely impacted than many other wealthy and developed countries. The naturally occurring El Niño/La Niña cycle (ENSO—the El Niño–Southern Oscillation) has traditionally subjected Australia to extreme weather events such as drought, floods, and serious bush/wild fires, but this situation has been dangerously exacerbated by human-induced climate change with an increase in the number and seriousness of events in recent years.’ Most Reverend Dr Philip L Freier, Archbishop of Melbourne and Primate Anglican Church of Australia.

Resources from the Church of England Environmental Programme